Justine Kwachu Ngum Kumche is a Cameroonian, holder of a Masters degree in Anthropology of Development, Co Founder and Executive Director of Women in Alternative Action- WAA Cameroon. She is the visionary founder of Queens for Peace International (QPI), a network of wives of traditional leaders as community peace-builders in Cameroon focusing on advancing the UNSCR 1325. Justine mentors and coaches young people into leadership. She is a member of the Civil Society Reference Group of the African Union Campaign to End Child Marriage and National Coordinator of Girls Not Brides Global: The Partnership to End Child Marriage; a member of the Gender-Based Violence Sub-Group in Cameroon coordinated by the Ministry of Women’s Empowerment and the Family and UNFPA.

Moreover, she is the Gender Focal Point for East and Central African Steering Group and member of the Peace Education Working Group of GPPAC. Since 2008, she has been the Focal Point and Coordinator of the Women’s Network of the International Action Network on Small Arms- IANSA in Cameroon. She is a member of the Executive Board of the Central African Action Network on Small Arms and a member of the Cameroon Action Network on Small Arms, and participated in the elaboration of the Kinshasa Convention on the Control of Small Arms and Light Weapons in Central Africa. She led her organisation in proposing draft alternative laws to laws that discriminate against women and girls as well as draft laws on the control of firearms to Cameroon’s Government and Parliament which propelled the adoption of Cameroon’s law on Arms Control. Justine is on the front line of Civil Society initiatives advocating for justice, peace, non violence, ceasefire and inclusive dialogue as sustainable ways in addressing the sociopolitical conflicts plaguing the English speaking regions and the Northern regions of Cameroon.

Dialogue for Peace in Cameroon

The people of Cameroon are suffering, as a result of the Anglophone crisis which has been deteriorating since 2016, the spillover of Boko Haram, the CAR conflict, and the electoral violence, hundreds have been killed and half a million displaced.
Read more 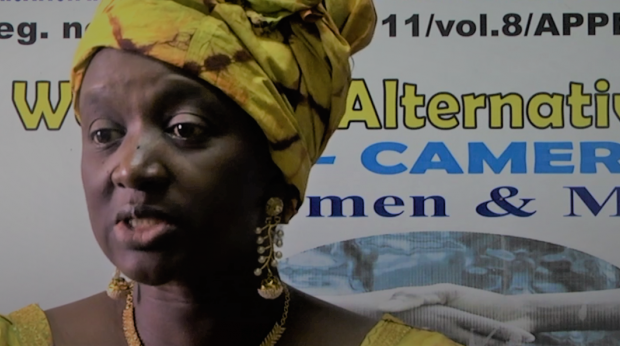