The Fragility of Peace in Ukraine and Beyond: From Reaction to Prevention

Being Ukrainian these days can be compared to being on an emotional roller coaster. During the last 4,5 years of unproclaimed "hybrid war" (since the annexation of Crimea in March 2014 and the military interventions in the East of Ukraine which followed), the average Ukrainian has gotten used to receiving daily reports from news agencies about the victims of ongoing armed conflict. Despite already getting used to violent reality, many people are now having one sleepless night after another. Almost at midnight on 25-26 November 2018 the Ukrainian Security Council and the Ukrainian President met with the aim to discuss the implementation of the martial law (for the first time since 2014). This was in reaction to the attack by at least one Russian vessel of three Ukrainian vessels near the Kerch strait when the former attempted to enter the sea of Azov. Some of the members of the Ukrainian vessels' crew were injured, and the others kept hostage. On November 27th, a Russian court ordered 12 of the 24 Ukrainian sailors to be held in custody for two months.

The tensions at the Azov sea did not start on Sunday. According to Ihor Semyvolos, (Executive Director at Association of Middle East Studies, GPPAC member from Ukraine):

"During the last year, the Russian Federation has been bringing additional warships to the Azov sea in the attempt to capture the Ukrainian sea ports of Mariupol' and Berdyansk. By occupying Crimea, the Russian Federation has full control over the Kerch strait and interpret in their own manner the right of Ukraine to freely sail through this strait. The events of the 25th of November constitute the casus belli, in response to which the martial law in Ukraine has been enabled in 10 regions for 30 days, starting on November 28." 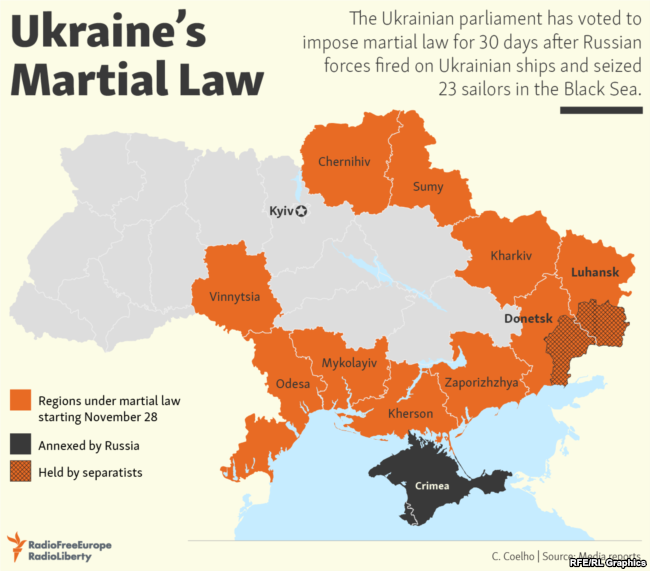 Many Ukrainians, however, expect more signs of support from the international community. According to Natalya Belitser (a researcher at the Pylyp Orlyk Institute for Democracy, GPPAC member from Ukraine) has said:

"By all means, international response for such brutal aggression perpetrated by Russia must be much stronger than traditional expressions of ‘disturbance', statements and claims just to stop it and liberate arrested ships and personnel who are now under trial by the illegitimate ‘court' in Simferopol, Crimea, on false charges of ‘violating the state border of the RF.' Otherwise, unpunished aggressor will be convinced in its impunity for undertaking further actions undermining security not only in the Black Sea region but throughout the world."

Being a Ukrainian peacebuilder is not only emotionally challenging, but it also involves a lot of responsibility for the security and well-being of average Ukrainians. Iryna Brunova-Kalisetska (executive director of the  Integration and Development Center for Information and Research, GPPAC member from Ukraine) has shared how her day on the 26th of November looked like:

"As a Ukrainian peacebuilder and social psychologist, I had two major focuses. One is more analytical with attempts to understand how the situation can develop both in interior politics and international dimension from security and electoral prisms. The second focus, the more practical one, was how psychologists can help the society not to get too emotional. Also because of fake news and social media manipulations that follow such crisis and are a part of the hybrid war. What is also important for our peace education work - to share clear and simple recommendations for our teachers on what to tell students and parents in order to reduce panic and give them the solid base for everyday decision making in a classroom in martial law status for those regions that it was applied to."

The speed with which the situation in Ukraine develops is very high, and what will happen tomorrow is very unclear. What is clear though at this moment is that the constant, continuous international attention and support for the sovereignty and integrity of Ukraine in its internationally recognized borders, as well as the security of its population is crucial. Rare statements of the deep concern at the times of the escalation of the situation are not enough as at the moment when such statements are made it may be already too late to react. As history teaches us, constant preventive measures are much more effective and cost less than dealing with the consequences.