Every voice matters for peace on the Korean Peninsula: A Perspective of Dr. Wang Danning from Beijing

In this series, we highlight the diverse voices of people passionately building peace on the Korean Peninsula as part of the Ulaanbaatar Process. Named after the Mongolian capital in which it was officially launched in 2015, the Ulaanbaatar Process (UBP) is a unique civil society dialogue for peace and stability in Northeast Asia (NEA). This is the story of Dr. Wang Danning.

The last seven years have been the happiest time of my life. Through the Ulaanbaatar Process, I have worked alongside like-minded people on one of the most challenging topics on the earth, building peace on the Korean Peninsula and in the NEA region more broadly. In this effort, I have witnessed the advancement of women’s and youth’s involvement in peace and security issues. It really made me feel that the UBP means something and no matter what difficulties lie ahead of us, we can make things happen.

Before officially joining the UBP three years ago, I was invited to attend regional diplomatic dialogues organised by the Mongolian government in 2015 and 2018. Those two trips brought me into peacebuilding work and set up a good foundation for me to join the UBP later on and start working on denuclearization and peacebuilding. Personally, I believe that in such processes, any demonization and hostile attitude is not helpful, and can only bring more tension. Therefore, the UBP attracted me most as a culturally diverse dialogue platform, where we are not only discussing peacebuilding but also promoting gender equality and interacting with youth.

Culturally, Northeast Asia has a long history of a patriarchal background, and women were treated as the second sex with no public role nor rights. Even today, women are not fully represented in the main political domain. So I am delighted to see that the UBP is progressing very well on putting gender at the core of its advocacy and that all participants have put a lot of effort toward this issue. However, there is still a lot that needs to be done. Although we have the United Nations Security Council Resolution 1325 (UNSCR 1325) as a framework to emphasise the importance of women's full participation in peace and security processes, the region still lacks a Regional Action Plan. This would allow us to discuss what needs to be done and how it can be done for a better future in NEA based on our own culture and regional realities.

Besides, the additional support from the European Union (EU) might bring us, the UBP participants, new opportunities to strengthen women’s meaningful involvement in peacebuilding on the Korean Peninsula. The EU has done a wonderful job in mainstreaming gender in nearly all of its political domains, including the welfare design and implementing UNSCR 1325. Therefore, we can learn from the EU experience and make women's voices truly heard in the peacebuilding process on the Korean peninsula.

In addition to women's participation in the UBP, I think the voices of the younger generation from the Democratic People’s Republic of Korea (DPRK) should also be heard. I grew up in Beijing during the socialist era before China opened up to the West and still achieved academic success studying in the United States. From my own experience, I firmly believe that people who grow up behind closed doors, under sanctions, can also step out and surprise the world. And they also deserve to know what is going on in the outside world and to be the voice of their own country. Organising summer camps where people of different ages, languages and cultural backgrounds can gather and learn from each other might help in this. The relationship of trust between the DPRK and China could make China an entry point between the DPRK and the outside world. As a Chinese teacher, specialist in gender and family in East Asia, I am interested in raising funds to help DPRK students with their studies, activities and travels, as well as giving them lectures and conducting training. After all, the future belongs to young people, and nothing makes me happier than watching young students gain confidence and develop.

I think of myself as playing just a small role in this big project and consider myself extremely lucky to be a part of the UBP, meeting so many lovely colleagues who had been putting great institutional efforts to build up this platform to discuss, communicate and build peace long before my involvement. Although there are many difficulties ahead of us, as long as we can work together and bring all, even difficult issues to the platform, we can present our individual opinions freely and mix them to form a perfect solution. When we are here, the future is here!

Dr. Wang Danning is a professor at the School of International Education, China Women's University and a member of the Charhar Institute, a leading non-Government think tank on international relations in China. Her research covers gender and family studies in East Asia, China studies, and urban and economic anthropology. 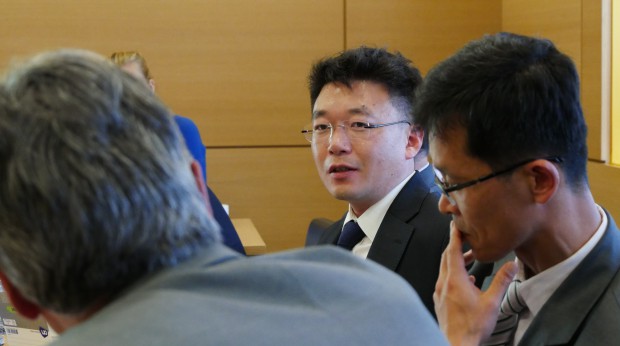